320 families live in the Can Domenge Residential Complex (Palma de Mallorca), developed by Grup Bauzá's real estate company Cotesa-Mallorca. A central and privileged area composed of 8 buildings whose names pay tribute to the city. Upunor joined the development's design team from the third building, Born (III) - following Bellver (I) and Almudaina (II), with its Combi Port and Aqua Port solutions, which form part of the housing units of the Rambla (IV), Marítim (V), La Seu (VI) and Tramuntana (VII) phases, in addition to the aforementioned Born.


Homes with 2 bedrooms or more in modern buildings that combine functionality and quality of materials with respect for the environment, and comfort and well-being thanks to Uponor underfloor heating systems and domestic hot water distribution.

“The opportunity to collaborate with Uponor was sought from the beginning of the project, but we were not able to start working together until phase 3, with the Born building, for which we pursued the main objective of optimising energy consumption and interior space in the homes," says Alex Gutierrez, Industrial Technician at Grup Bauzá specialising in Environment and Energy Efficiency.

In order to design a centralised system, the heat generators - combined with solar energy - were placed on the roof. From there, the water is delivered to the households via a two-pipe distribution system to the Combi Port stations of each home, instantly producing DHW and Invisible Underfloor Heating. 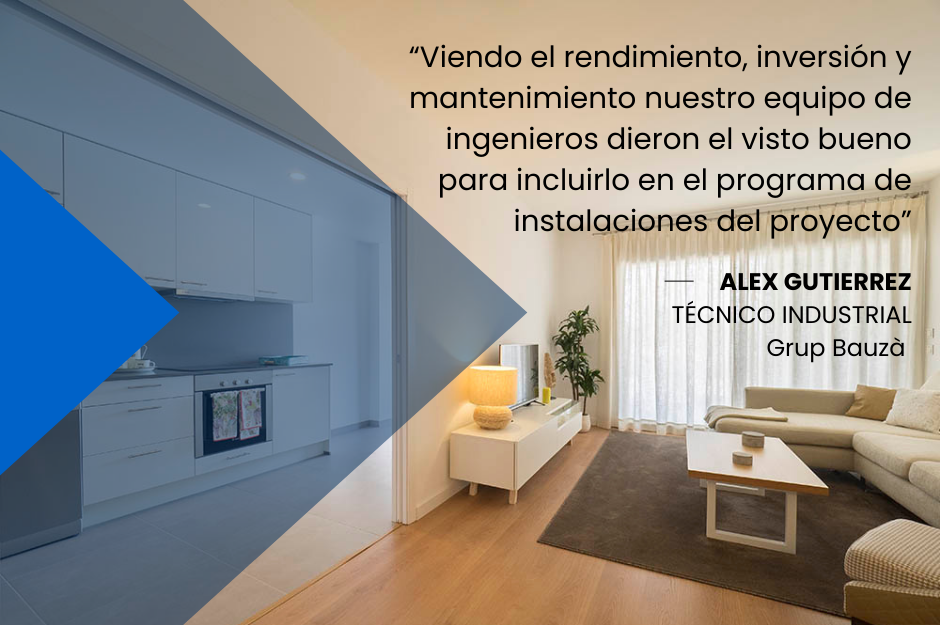 Optimising energy consumption and space inside the home

“The Uponor service team immediately carried out a study of phase 3, which we were designing at the time, and presented us with the possibility of installing the Combi Port. We then tested this solution in phase 2, which had not yet been delivered, and seeing the performance, investment and maintenance, our engineering team gave the go-ahead to include it in the project's installation programme," says Alex Gutierrez

The performance test carried out in phase 2 was among the reasons that convinced Bauzá's Technical Department to choose the Uponor solution Combi Port, where "it was possible to appreciate the quality of the equipment components at first glance, as well as the positive results obtained in the operating tests, where the temperature difference between the primary circuit and the DHW production temperature was barely 3 degrees". 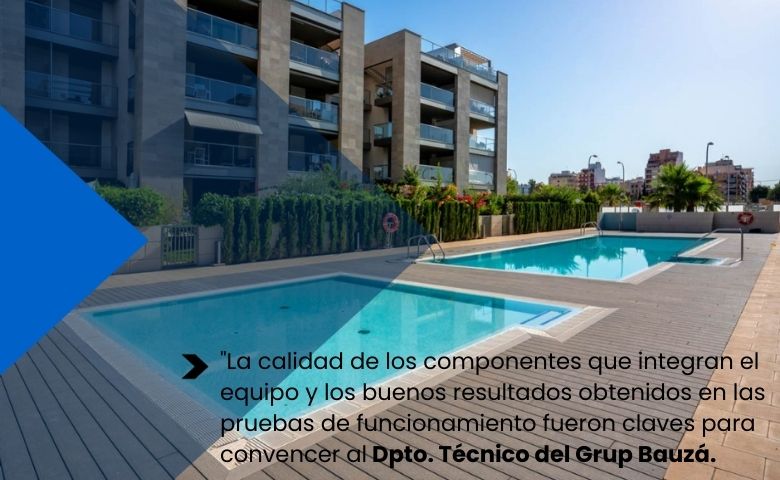 This collaboration continued to develop, optimising solutions based on accumulated experience, until the last of the recently completed developments (Tramuntana). In total, Uponor has been involved in 5 of the 7 buildings that make up Can Domenge, and the collaboration with Cotesa now extends to new projects that Grup Bauzá has underway.

Project Key Facts as PDF
“The owners of the phases developed with Uponor are very satisfied, showing us that the decision was the right one. We have also managed to optimise the interior space of the home and increase the energy efficiency of the building" Alex Gutierrez, Industrial Technician of Grup Bauzá

“The owners of the phases developed with Uponor are very satisfied, showing us that the decision was the right one. We have also managed to optimise the interior space of the home and increase the energy efficiency of the building" Alex Gutierrez, Industrial Technician of Grup Bauzá
Partners
Project management: Engineers Assesors S.I.
Developer: Cotesa (Grup Bauzá)
Installer: Coemsa

Shanghai sheshan yard developed by Lujin company is a high-grade hardcover residential area, which is located in Shanghai,songjiang district, with a total area of 42000 square meters, 540 apartments.

2022 sees the completion of Maarjamõisa Medical Campus managed by Tartu University Hospital. The largest centre of its kind in Estonia, the Campus concentrates active medical care in one compact system. Uponor Estonia is participating as advisor, and as supplier of potable and heating water systems in the second construction phase currently under way.
Open link

Housing company Hottonia located in Olari, Espoo, had a successful renovation that was finished in September 2018. Everything went according to time schedule and the result was excellent. The renovation was carried out with prefabricated solution Reno Port cassette.
Open link

The old factory building gets a new life as loft apartment building. Skanska Oy renovated the building into 23 different size and type of apartments.
Open link

The joint renovation project in Maunula – cost savings through co-operation

In the Maunula district of Helsinki, an exquisite joint renovation project is under way. The project, begun in 2012, involves six housing companies. The modernisation of the building technology is being implemented with elements from the Uponor Cefo line, for renovation of water, sewer, and ventilation systems, coming to 1,350 elements in total.
Open link

Postitalo, the former post office building in downtown Tampere, got a new look in 2017 when it was renovated into new commercial premises and a block of flats was built on top. The heat distribution system of choice was Uponor's underfloor heating and cooling system, which was installed in all flats.
Open link
Prefabricated solution fastens installation of underfloor heating system

Appartment building called Joutsen (Swan in english) is a four floor building with 18 stylish and modern appartments. The building will be attached to local heat network in near future. In each appartment, there is an appartment specifc underfloor heating system with Comfort Port solution.
Open link
Smart heating and cooling in multi storey building

High quality and comfort were the guiding principles when desinging the heating solution. All appartments have Uponor's radiant heating and cooling system which is connected to building's automation system.

Jyväskylän Holvi is a new apartment building with 43 apartments right in the heart of Jyväskylä. Uponor Tacker underfloor heating system and Uponor Smatrix Base room control system were installed in each apartment.
Open link

Decibel soil and waste system were installed in the new appartments in former prison Kakola.

Former Kakola Prison in Turku is becoming an appartment building were one of the most important comfort factors has been carefully designed soundproofing. Decibel soil and waste system ensures that the appartment's drainage is also quite and long lasting.
Open link
Stylish rock home was renovated with practical viewpoint

Sipe Santapukki's appartment in the small multi story building that was built in 1930's was renovated thoroughly. Practicality, intimacy and energy efficient were the starting point for the renovation. Uponor's underfloor heating system and Drain gully system was chosen for the renovation.
Open link

All solutions in the Puukuokka block, which was completed in Jyväskylä, have strived for sustainability, quality and coziness. Living comfort and energy efficiency are also ensured by radiant underfloor heating system installed in each of the block’s 186 homes.
Open link
Renovation made easy by Reno Port

Renovation made easy by Reno Port

The Petreliuksenrinne housing company controls a group of residential buildings that were constructed in 1969. The company manages 124 flats, which were subject to an overhaul of their water supply and sewerage systems. The floor drains, bathrooms, electricity distribution and antenna systems were also overhauled.
Open link
Line renovation is easy with the Uponor technical wall

Line renovation is easy with the Uponor technical wall

Sampo plc has chosen the Uponor technical wall as the solution for the renovation of the damp areas in several blocks of rental flats. The project is expected to run from March 2015 to February 2017. There are a total of 150 flats at the sites.
Open link

Construction began in 2012 on two modern blocks of flats – known as Helsingin Aalto and Helsingin Ruislintu – along the shore of the Töölönlahti bay in the centre of Helsinki.
Open link
New block of flats built with Uponor's R2i elements

Two blocks of rental flats were completed at Sokeritehtaantie 15 in Kirkonummi in summer 2015. The new sites were realised with Uponor's R2i elements.
Open link
A line renovation was carried out in a block of flats in Turku using Uponor's R2I elements

Line renovations in blocks of flats can be conducted significantly faster and more easily. The Uponor R2I cassette makes for a problem-free renovation. Thanks to advanced prefabrication, the project period is shorter and the risks are lower. The As Oy Varsta company in Turku is the first R2I pilot site. The site will be completed to an expedited schedule.
Open link

Aleksanterinkatu 5 in Lahti will be completed with R2I blocks

An 8-storey apartment is rising in a former bank district in Lahti. The target will contain 265 apartments and is designed by A1 Arkkitehdit Oy and will be built by Nuorisosäätiö. There are 256 rental apartments reserved for students on floors 2-7. Uponor R2I blocks will be installed in all of the student-apartments in connection with bathroom and kitchen elements. Aleksi 5 is the first new destination in which R2I blocks are being delivered and in which sound-absorbing Decibel drains are used.
Open link

"LEO 250" brings together sophisticated architecture and superb energy efficiency. Construction time was speed up due to the use of an Uponor systems.
Open link

For the conversion of the historic building, the planners relied on decentralized apartment stations from KaMo and floor heating and cooling from Uponor.
Open link

New campus for the International School of Kuala Lumpur (ISKL)

Ewha Womans University had planned the underground campus, which is a global trend for space creation, in order to solve the problem that the available space on the ground was insufficient despite the increase in the space demand in the campus, in accordance with the Ewha Womans University Development Plan in the 21st century.

Harmony in the rhythm of the city.

YIT Green City is a city oasis in Purvciems district

“At the end of April 2011, the starting signal was given for the construction of 295 student residences on Mijnbouwstraat in the Dutch city of Delft. It’s a unique project combining new developments and renovation in a unique way.”
Open link
Barkli Park

Premium-class residential complex is located in one of the most picturesque parts of Moscow.
Open link

The best development project implemented in Russia in 2005.
Open link

The Galaktika residential complex is located in one of the environmentally friendly areas in the southern part of the capital.
Open link
Millenium Mixed-Use Development

Distribution system for a reference building in the center of Bratislava

A unique multifunctional project in the centre of Bratislava
Open link

Uponor Decibel suppresses sound from the waste water in Gothenburg

The Borgeby block in Gothenburg, located on one of the busiest streets in the city center, became a prestigious project for Uponor when the Decibel indoor waste water pipe system was chosen.
Open link

Connect the buildings to the district heating system that supplied the two site’s 300 apartments with hot water.
Open link

To help address the housing shortage in Derby, an office block (Norman House) has been converted into 134apartments. As part of the conversion, electric heating, mains cold water distribution systems and hot water cylinders were installed in each room.

A recurring problem with pinhole-sized pipe leaks in copper required plumbing repair and repiping. Learn why the...
Open link

Learn why contractors chose to install an Uponor AquaPEX® plumbing system for these apartments based on product reliability and ease of installation...
Open link

Learn how the challenge of replacing 45-year-old underground plumbing, heating and cooling system in an...
Open link

Two seven-storey blocks of flats were completed in the Mukkula district in Lahti in late autumn 2015. Service flues were installed in a total of 108 flats at Asunto Oy Lahden Timonkadun Helmi on Timonkatu.
Open link

The Uponor project ’Sluseholmen’ has served as inspiration for developing a brand new and advantageous plumbing solution.
As a result, Uponor now offers a new, optimized and well structured, compact and easy to use prefab basic unit with flexible connectivity options for managing water and heating in varying types of housing.
From now on, Uponor provides the construction market with these prefab shaft units, primarily intended for modern floor building and terraced houses.
Open link

A new standard of comfort in Burgos.

Two apartment buildings in Brusaporto, Italy, offer a high level of living comfort after renovation – also thanks to the Uponor Minitec underfloor heating system. With its low installation height, it is ideally suited for retrofitting.
Open link